We cultivate and raise the voice of your brand with a team of strategists, content managers, copywriters, and consumer responders, in order to drive meaningful social engagement with your target consumer.

We are the new generation of social media marketing. Our ideas are out the box and unique but they work. Our creativity and out of the box ideas are what make us experts in creating and elevating stories in the digital space.

Sutton began her career in marketing at Disney Motion Picture PR and Marketing in New York City, where she worked on smash hits like The Avengers and Brave.

After relocating to Los Angeles, she began working as an actress (“W/ Bob and David” Netflix, “12 Days of Xmas” Comedy Central) and model (Wella, Skechers) until she was offered producing jobs.

She co-produced the livestreamed event Halloween House Party with Special Guests Mario Lopez, Sommer Ray and Hannah Stocking in the fall of 2016 and has directed several viral videos and ad campaigns across Youtube and Instagram.

Arthur is also a graduate of Columbia University (Ivy League) in New York City. He is a consultant for Digital Marketing and Social Selling for major organizations on our team.

Prior to working for Dark Glow Media Arthur worked at a prestigious Law Firm in NYC. He said “I want to work somewhere more fun and escape this New York weather.” so we gave him the job. Didn’t hurt that he was more than qualified.

Currently, he manages all SEO and Digital Marketing Strategy for the firm’s top clientele.

Arthur has also consulted in the area of Online Personal Branding Influencers for over the last 5 years. Through his own developed process, he has helped global executives build, grow and protect strong online reputation that have led to developed new business for their organizations.

Rob Level started his internet marketing career in order to promote his music. When he was a struggling up and coming artist he had to create free and low cost strategies in order to spread his music. Over 10 years of this approach has wired his brain to save every penny possible in marketing in order to create systems to work around the ‘norm’ in order to grow a brand.

He took those out of the box strategies and grew a massive fan base. He now has done record deals with big name labels, every album he releases is an iTunes Top 100 charting album and he has been posted everywhere from TMZ to MSNBC.

Everyone from Seth Rogen to Rob Dyrdek (MTV’s Ridiculousness) has said good things about his work.

He has successfully grown 4 YouTube channels and accumulated over 30 million views in total with 0 zero marketing dollars.

He and his team have also written singles for big name artists like Jordyn Jones and many others. 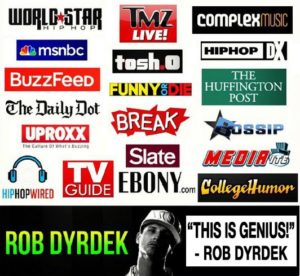 What Can We Help You With?

Dark Glow Media has been in business less than 6 months and we have already created entire marketing campaigns for brands and apps.

We literally quadrupled an app’s downloads in 2 weeks and they had been up and running for 8 months.

We created an entire brand identity for them, 3 commercials and entire YouTube series to organically grow their brand. We did all of this in just 2 weeks with a miniscule $5,000 budget.

Our skill sets extend over a myriad of industries.

Sutton Smith has been in numerous movies and TV shows and has also directed short films. Her time at Disney gave her the understanding of how billion dollar companies run a business with a bigger picture in mind. She is also classically trained in music and attended top acting schools in both London and Los Angeles, CA.

Arthur is a non stop hustler. He falls asleep every night listening to the newest entrepreneur audio books. When he isn’t listening to audio books you can catch him testing new ideas and strategies to see what really works.

You won’t find a team of harder working up and comers whose skill sets span across the entire entertainment industry.

Your plans and dreams are probably similar to ours. Everything we learned we learned from trying to accomplish our own dreams in our own field. We not only understand how social media marketing works, we understand the end goal and how much work it takes to accomplish dreams.

Shoot us an E-mail Rob@DarkGlowMedia.com